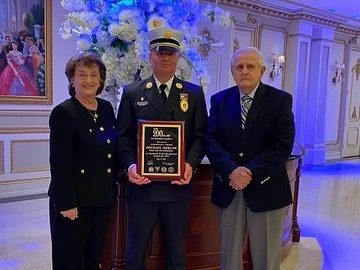 Last evening Assistant Chief Michael Dorlon was presented the Meritorious Service Award by the Morris County 200 Club for his courageous actions at a structure fire April 29, 2021. The members of Budd Lake Fire Department couldn’t be prouder. Budd Lake Fire Department was dispatched to a structure fire on Netcong Road on April 29, 2021. Assistant Chief Michael Dorlon (Car 52) was one of the first Chiefs on scene and was advised that there was a renter in an apartment in division two of the two-story structure. Without hesitation, Assistant Chief Dorlon donned his personal protective equipment and self-contained breathing apparatus and made his way up the stairs under heavy smoke conditions. He started to make entry into the apartment on division two where he encountered hoarding conditions. As he felt his way into the apartment, he found the unconscious victim on the floor. Unassisted, Assistant Chief Dorlon pulled the victim down the stairs and was met at the bottom by police on the scene. The resident was moved to safety where EMS provided medical assistance. As Assistant Chief Dorlon exited the structure the first engine crew entered the building, located the fire in the bathroom of division two, and quickly extinguished it. Even though he took extraordinary actions that day, unfortunately the victim succumbed to injuries sustained in the blaze. Attending the dinner to support Assistant Chief Michael Dorlon was Chief Compano, Assistant Chief Maloney, Lt. Engle and Lt. Herring. Engine 59 was on display outside as the 200 Club celebrated their 50th Anniversary.